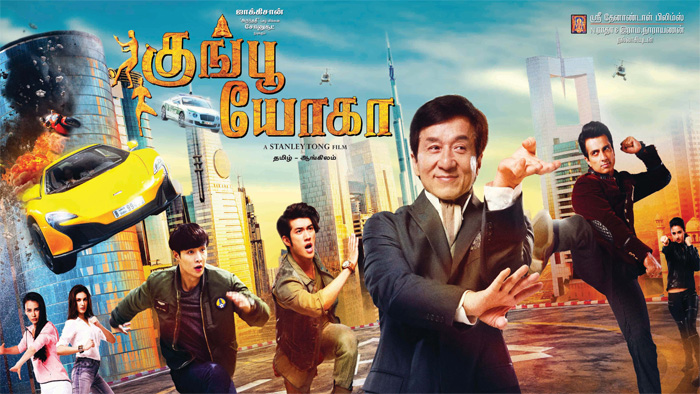 Kung Fu Yoga is a studio movie that offers the appearance of the frozen arctic at the zenith of its beauty. Icicles dripping, glaciers cracking, cavernous ice-spelunking, and battles on ice make for eye-popping cinema. There is something about Jackie Chan mixing kung fu and wing chun while everyone else is slipping on the frozen surface…Then again, Kung Fu Yoga also has a great deal of CGI which distracts from its call to nature. There is a sort of clash of cultures between India and China, but we all know this can make for great romance. Kung Fu Yoga is a movie that you can sink your teeth into for an hour and forty-seven minutes, but try not to get too bent out of shape over the improbability of real v. CGI. Jackie Chan is 63 years old and likely would not have been able to perform derring-do stunts on ice.

Pristine glacial preserves, ice dagger, collapsing cavernous mountains of frozen water, and any other words you can conjure to describe the frozen topography/ice caves of Tibet are most welcome. Jackie Chan is Professor Jack, an aging professor that has sought to unravel mysteries for decades. Disha Patani portrays Ashmita, an academic colleague from India whose beauty astounds even the female graduate assistants. Beyond the two stars Patani and Chan, there are a handful of tweeners and villains seeking to thwart Jack’s mission to the arctic to retrieve a treasure of untold pricelessness.

The storyline of Kung Fu Yoga is actually rather generic, tame, and predictable. The romance reminds me of Korean Novellas such as Boys Over Flowers and Heirs. The villains never truly stand a chance of succeeding and denying the world the ancient treasure trove, but that is beyond the point. This movie, Kung Fu Yoga, is really about infatuation, wisdom, and forging one’s destiny. Jackie Chan has lost a great deal of his athletic ability, but his sense of humor and ability to depict a wise older man are as intact and functional as ever. Chan at the helm always leaves a sense of ultimate security no matter how stacked the odds.

Kung Fu Yoga would make for an excellent choice for my fellow Floridians as they ride out Hurricane Irma. A variation of an old expression provides that a little glacial excitement goes a long way during a tempest. That is to say that some excitement aside from watching trees collapse and winds blow at 100MPH will do the mind, body, and soul some good. After all, this is Kung Fu Yoga.