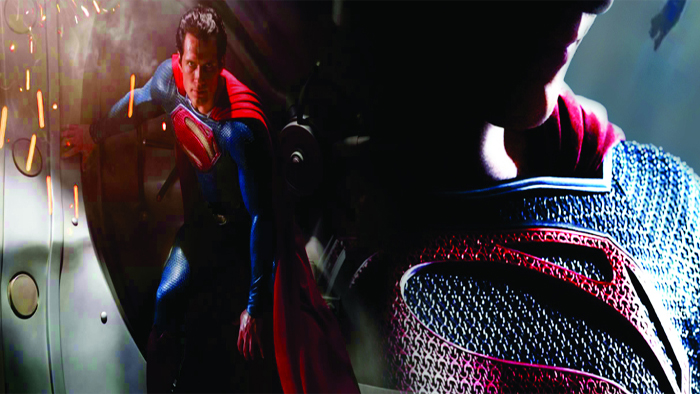 The new Superman movie, Man of Steel on DVD-Blu-ray, is chock-full of undying prodigious moments, and then those instants quickly turn to pathetically pandering seconds of total absurdity. Aggregately, Superman: The Man of Steel has been trashed by the critics and adored by the fans. This raises a serious of questions. Is Henry Cavill really the man to fill those formerly red boots of the so-called “Man of Steel”? Is Amy Adams an objectionable choice for the legendary Lois Lane? Ms. Lane is supposed to be brilliant and romantic and dark and sexy. Amy Adams is one of those adjectives and it’s not sexy or romantic. Is Michael Shannon a suitable replacement for Terrence Stamp (the first General Zod whom one should of course always kneel before)? Moreover, how should director Zack Snyder have both borrowed from the oldSuperman moviesand infused this new version with his own vision for the iconic super hero? Read on to find out the answers to these incisive questions about thenew Superman movie, Man of Steel on DVD-Blu-ray.

As Superman, Henry Cavill is adequate. Frankly, I like Dean Cain and Christopher Reeves better. Fortunately, Cavill is no Brandon Routh in that he can actually act and articulate emotionality. For the ladies in the movie house, Cavill is chiseled like a Greek statue. Women find him hot and not just because he absorbs the sun’s considerable ultraviolet radiation waves. The young British actor is a suitable Superman with raw potential. He neither adds much to the character nor does he subtract glaringly from him. Perhaps we will grade him after the next three Superman films (that have been green lit) debut.

Amy Adams is a fine actress. Nobody can deny that she possesses and demonstrates considerable talent. She is expressive and fun and precise. No joke though, she is no Kidder, Margot Kidder to be exact. The Christopher Reeves Superman fell in love with Lois Lane’s passion and drive and her desire to find her perfect soul mate. She was sexy and daring. I simply have not perceived that with Adams…yet. She is sort of there to fill a role that she is not prototypically designed for. The romance between Lois and Clark is rather gossamer.

Michael Shannon looks like an alien. No, that is not an insult to the man’s considerable movie star looks. Much like David Morse, Shannon has the science fiction look. It is somewhat intangible but the eye test will always make the determination. As General Zod he is at times overdramatic and overemotional. However, by the film’s end viewers will come to understand Zod’s motivation and his devotion to his people. Shannon nicely, in concert with director Snyder, weaves together two opposites to form one extraordinary man, even if he is the film’s purported villain.

Russell Crowe is the real star of the show. He portrays the legendary Kryptonian scientist Jor-El. Kevin Anderson made him famous in his novelThe Last Days of Krypton. It is increasingly obvious that Crowe has been wasted on several terrible movies during the 2000s. He is nothing short of brilliant, at least when cast properly. As a scientist and a warrior his expertise jumps off the screen and into our 3D glasses. His gravitas is becoming a thing of beauty.

Overall, new Superman movie, Man of Steel on DVD-Blu-ray, is thrilling. For a film with a run time of well over two hours, the action is surprisingly relentless. The only parts that should have been excised on the cutting-room floor are the horrible flashbacks that are mistimed and disrupt the action sequences. Adding Kevin Costner and Diane Lane to the cast was a stroke of brilliance. Both are total experts and they act in the moment without even the slightest hint of hesitation.

One gripe I cannot overcome is that the new Superman movie, Man of Steel on DVD-Blu-ray, is something of an alien invasion movie. That is not really what Superman is all about. This desire to have Earth terraformed into Krypton by alien spaceships that are light-years-advanced is terribly silly and it fits like a shoe that is three sizes too big for one’s foot. Additionally, the first thirty minutes are reminiscent of the Star Trek reboot. Blunders aside, when the new Superman movie, Man of Steel, is good, it is downright phenomenal. When it stinks go use the restroom and avoid losing interest in the movie.
Superman Man of Steel movie trailer