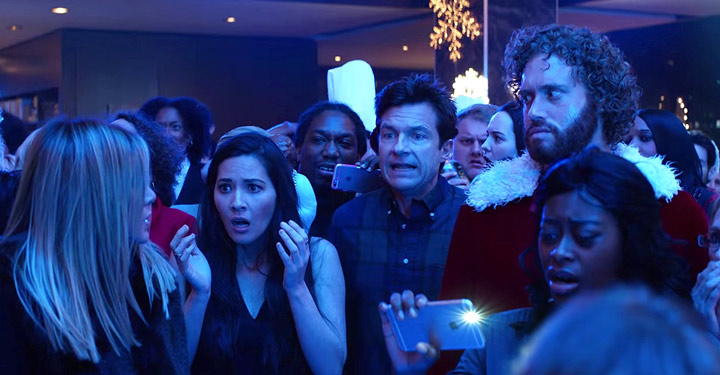 Seeing a movie on Christmas Day is a singular tradition unlike any other. Typically, families will congregate to enjoy a special film, and what better time than when the world is in a virtual standstill? As I contemplate all of the wonderful holiday classics and the movies I have enjoyed over this special holiday, Office Christmas Party is the last thing that comes to mind, but it better, because this is a movie review of OFFICE CHRISTMAS PARTY.

Jason Bateman and Jennifer Aniston are fine actors. I may be the only pundit in America willing to say that Aniston needs to transition from wannabe sex symbol to acting like a classy 50-year-old woman that demonstrates charisma and poise, not tasteless raunchiness every chance she gets, but to each his own. Bateman is a fine actor, but he has been doing the same comedy routine for decades. He is staler than that fruitcake you intend to eat but never get around to until intoxication compels you into submission only to find out it is expired, and probably would have tasted disgusting in the first place.

Fortunately, Office Christmas Party showcases the talents of many other up-and-comers. T.J. Miller is a politic lunatic (he assaulted and battered an Uber driver because the Uber driver dared to praise the President-Elect), but he has some talent in the art of awkwardness. His considerable height and puzzlingly bewildered look allow for whatever words exit his mouth to seem moderately humorous because what choice do audiences have? Laugh or…There is no alternative.

This brings me to Aaron Rodgers’ girlfriend, I mean actress Olivia Munn. Munn is half-Chinese (perhaps some Vietnamese as well) and she has a rare and uniquely lovely appearance. It is hard to look elsewhere when she is on screen. To her credit, in Office Christmas Party, she portrays a character that is a sensitive sweetheart with a side of leadership and academic brilliance to boot. The character is tailor made for her sort of dramatic pizzazz. She does a really nice job in diverting our attention away from the nonstop onslaught of jackass humor the movie screenwriters provided us with.

My movie companion Attorney Jack and I debated throughout this movie whether it took the writers 15 minutes or 30 minutes to write the script of Office Christmas Party, a movie in which Jesus is riding on a horse when it jumps through the window of a high-rise office complex and we never find out what happened to him. I insisted on 15. In any event, Office Christmas Party is not a special family film, it is an hilarious hodgepodge of degenerate garbage, and it is consistent in its loathsomeness.