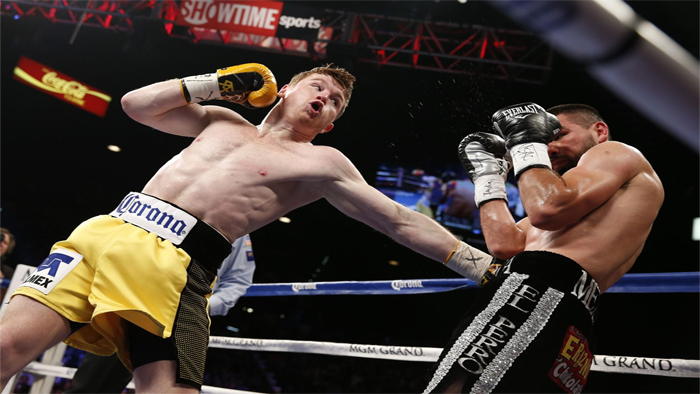 Golden Boy has parted ways with a plethora of Al Haymon represented fighters. This is the big news emanating from the settlement arrived at between former Golden Boy Promotions CEO Richard Schaefer and a newly resurgent Oscar De Lay Hoya. If De La Hoya continues his career resurgence with the ferocity he did his boxing career as the Golden Boy, his company is in for many victories in and outside of the ring.

Canelo Alvarez is the Face of Golden Boy

Many columnists are making hay about the fact that the most prominent and arguably talented fighter left in the Golden Boy stable of pugilists is none other than Canelo Alvarez. Canelo Alvarez is a solid fighter with a great attitude, a commendable record, a marketable image, and he is beloved by the largest contingent of boxing enthusiasts in the Western hemisphere (Mexican fans). Can Alvarez take the next step and become the next major face of boxing? That depends largely on the outcome of his next fight, be it against Miguel Cotto or some yet unnamed opponent.

Frankly, much depends on Bob Arum’s awareness of the danger in not cooperating with Golden Boy (GBP). If Arum demurs it will only add fuel to Mayweather and Al Haymon’s trailblazing fire. Arum and De La Hoya need to fully iron out their issues and work together for the common cause of not only making money, but offering fight fans the very best, most competitive fights in 2015. 2015 needs to be a record year for boxing should the two promotions maintain their perennial spot at the top of the sport.

Finally, what does the lawsuit settlement mean for Mayweather v. Pacquiao? Anyone claiming to know is a mere speculator but it is fun to scuttlebutt. I believe that Mayweather will make negotiations so puerile and immature as to render any progress impossible. He is merely trying to prevent Top Rank from taking away his coveted May 2 prize fight date. To suggest otherwise would likely be foolish and untrue. You go Oscar De La Hoya, the entire boxing world is counting on you.