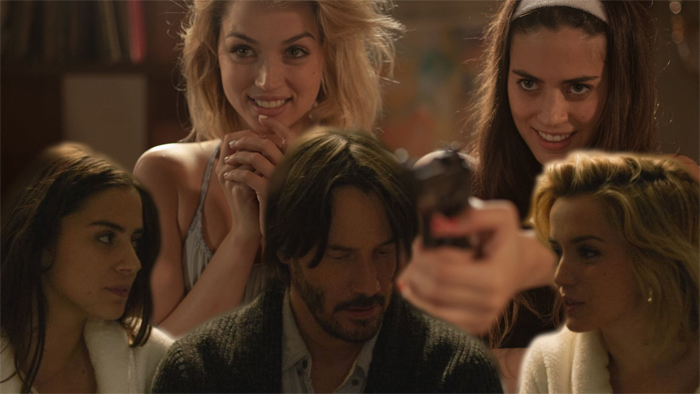 There is a reason why Keanu Reeves’ new horror movie, Knock Knock, performed miserably domestically, but reasonably mediocre overseas. Internationally, there are fewer choices for cinematic entertainment, not universally, but in many countries where not every person has the same access to cinema as we do ubiquitously in America. I have been an avid follower of Keanu Reeves’ work, and I can offer an unbiased assessment of Knock Knock. Put on your pumpkinheads, or cheeseheads if you are a Packers fan and listen fastidiously.

Keanu Reeves is built for movies like John Wick and Street Kings. He is built for action, adventure, mysticism, and most of all, for extreme violence. He is not a romantic comedy star or a lover, he is a fighter and directors ought to realize that by now. It is better not to make a terribly picture than to cast a generation talent in a role wholly unsuited for him. Knock Knock is kryptonite for Reeves whose performance leaves a sincere feeling of bitterness in audiences’ mouths of madness.

Knock Knock is about a husband whose wife has become prudish because of their children. This is why Reeves’ character welcomes two underage ladies into his family home late at night. They are wet when they enter, but are going to become soaking wet once inside. After indulging in acts of steamy carnal lust, and proving that Reeves could pull off a porn if ever required, he discovers that these two indulgent ladies are not mere skanks willing to fornicate with a random married man for no apparent reason. Nope, these two ladies are remorseless sociopaths that thrive on sexual escapades followed by violence and havoc of the most disgusting kind. They love to injure, to murder, and to destroy.

Most of all? These two ladies of the evening, if you will, have an unseemly desire to punish their sexual conquests. They want to ruin the lives of everyone they screw, which is screwy actually. Instead of leaving their lovers with a smile on their faces, these two unbelievably sensual ladies instead want to raise hell by trapping their men in the throes of public opprobrium and private humiliation. They utilize sex as a means with which to eradicate any shred of happiness and dignity their lovers may have enjoyed.

Knock Knock is in theory a really intriguing movie. In practice, it is a terrible waste of Reeves’ time, the studio’s money, and audience’s nights. The misuse and miscasting of Keanu Reeves is deplorable, but even worse, the wasting of our time is unfortunate. Knock Knock whose there? A shitty movie.