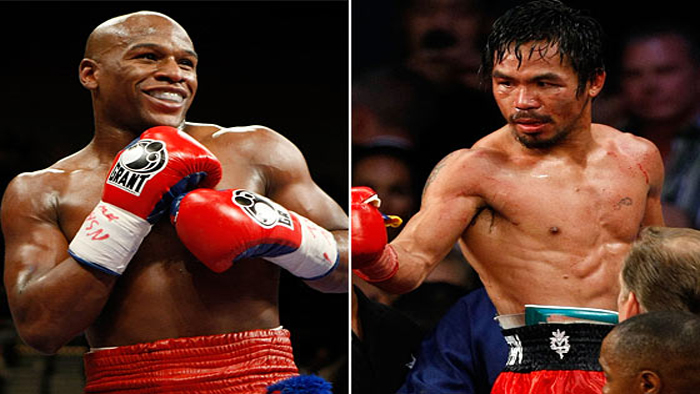 Manny Pacquiao has taken to the public airwaves to tell Floyd Mayweather a special and yet pithy announcement: “SIGN THE CONTRACT!!!” If only Floyd would listen, boxing fans would reignite their decade old debate about who the all-time pound for pound fighter is, was, will be, etc. Let’s revisit Floyd Mayweather’s reluctance to make a fight with Pacquiao.

Mayweather first insisted on drug testing that he would likely not submit himself to. He then demanded the lion’s share of the prize fight earnings and Manny demurred to both demands.

Since then, Manny Pacquiao has agreed to all terms including the financials and drug-testing (so far as we can tell from the outside), and Floyd has yet to sign the contract. Floyd’s reluctance has gotten so bad, that critics are beginning to question his status as an elite fighter. Rumors are swirling like the scuttlebutt they are, that Mayweather is scared of tarnishing his perfect record.

How can the “best” defensive fighter be so afraid of an opponent he routinely calls desperate, over the hill and deflated? Only one man can answer that question and he does so with increasing layers of ignorance; that is Floyd Mayweather, Jr. To continue to elevate Mayweather to the pinnacle of the pound-for-pound fighter list, when he cherry-picks ever opponent and dances around fighting the best, would be a slap in the face of the boxing world.

Were I a betting man I would predict that no fight will be made and instead conjecture this charade is nothing more than a ploy on Mayweather’s part to throw a proverbial monkey wrench in the rapprochement between Golden Boy Promotions and Top Rank concerning the May 2 Cinco De Mayo date previously reserved with Cotto and Alvarez.

Oh well, at least we know Manny Pacquaio will fight again in the next few months, but really, not many people are heavily invested in his performances at this stage in his career. They want Manny to leave with a bang not a measly whimper. It takes two to tango but only one to run.

Breaking news; Mayweather and Cotto are in negotiations for a possible rematch. “Adviser” Al Haymon is seeking to orchestrate this fight from behind-the-scenes.

Of course, this also means that Canelo Alvarez and Miguel Cotto have stopped negotiating.

This puts the limelight on a possible Cinco De Mayo showdown between Cotto and Mayweather.