The Martian the Novel or the Movie? 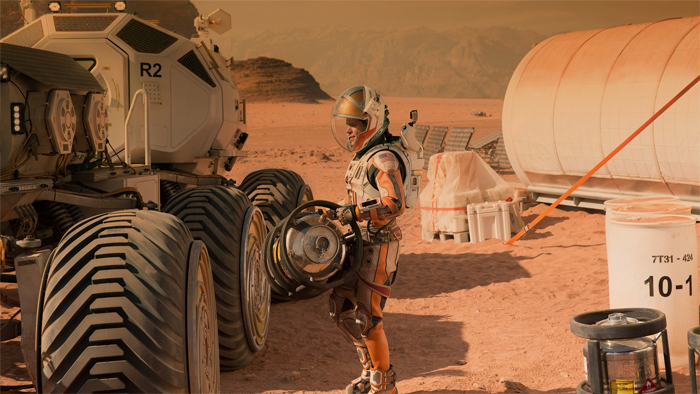 The Martian the Novel or the Movie?

The Martian movie may well win an Oscar for Best Cinematography or Best Visual Effects, but those are not the most coveted categories for an actor. Matt Damon, star of this year’s best space movie, (yeah, it’s a dumbed-down self-described genre) The Martian movie, has become one of our nation’s best actors and he has done so rather smartly. The problem for Damon as pertains to this year’s Oscar contention is the script for The Martian is primarily based on Andy Weir’s similarly titled novel, The Martian.

Andy Weir’s novel is his first major literary work and it really shows. The novel is exciting in its own right, because page turners with a penchant for profanity are often sizzling, but to compare it to more substantial literary achievements would be a mistake. To his credit, director Ridley Scott is faithful to Weir’s novel, save for some plot points being edited into oblivion because of time constraints. And therein lies the problem.

The ending of The Martian movie is humorous and clever and it showcases the charm of Matt Damon. Damon, to his credit, spruces up what otherwise might be the never-ending space odyssey that is teetering on the edge of being bland. Remember I wrote that the ending is clever? That is because screenwriter Drew Goddard extended Weir’s novel in order to allow for a more palatable ending so as to not leave viewers simply thinking the science experiment is over and poof time to go home at warp speed. This may be one of the first and only times I have been disappointed that Hollywood has stayed so true to the novel it portrays cinematically.

Beyond Damon’s performance with pizzazz, credit must also be ascribed to the likes of Jessica Chastain as Captain Lewis (she is always so calm and so smooth), to Sean Bean as Mitch Henderson a.k.a. the speaker of the meeting of Elrond (a secret meeting about the one ring!) (ready for a precious personal fact? My wedding band is a replica of the one ring, or is it a replica?), but most of all, the spotlight shines brightly on Chiwetel Ejiofor as Vincent Kapoor (director of missions to Mars for NASA). There are so many rock solid performances that I could more than double the length of this article to begin to account for them.

The point however, is that The Martian movie is an Oscar contender, a really good movie from top-to-bottom, but the source of the script, Andy Weir’s novel both lends itself to greatness and to mediocrity. Ridley’s Scott’s devotion to Weir is again laudable, but it hamstrings what could otherwise be a movie packing more punch. On an aside, as great as the acting is, the supporting characters do not seem to be as outwardly emotional as one might expect for working on such an improbably death-defying mission. Perhaps history will prove me wrong, but in the meantime, I enjoyed The Martian movie almost as much as fellow Oscar contender Carol, but in a radically different way.