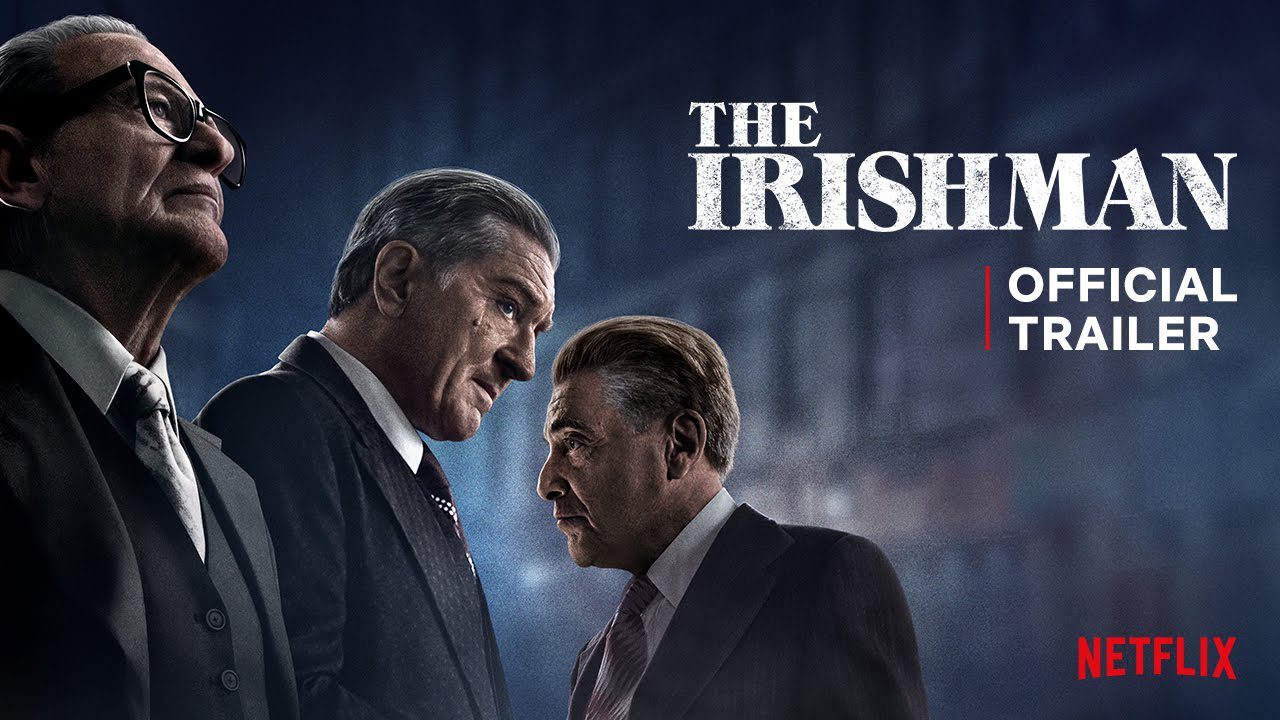 Netflix The Irishman Movie Review written by Jonathan Jacobs. Netflix’s The Irishman seeks to resurrect ghosts from yesteryear. Sadly, those ghosts, though resurrected in spirit, are mere specters of a long-gone heyday. Bringing together the big three of gangster and mafia movies and placing them under the umbrella of their lord and commander Marty Scorsese, seemed in principle like a spectacular idea. Unfortunately, the tires may be retreaded on this genre celebrating gangsterism but only in part. Devoid of originality, and a copy of a copy of a copy, ad nauseum (dealer’s choice here), The Irishman is nothing more than Netflix’s grand but misguided attempt at entering the Oscar race. One cannot buy love or happiness is has been said, so why not try recognition and awards? This is perhaps the reason Steven Spielberg cautioned against streaming movies without movie houses and heaping praise upon them. Nevertheless, albeit nicely directed, and deftly stage-crafted, The Irishman fails to live up to its lofty pie-in-the-sky hype.

To Whom Does The Blame Go In This Netflix The Irishman Movie Review?

This Netflix The Irishman Movie Review clearly argues the actors and the director of The Irishman are blameless and escape my rebuke. The story of Hoffa’s disappearance and Frank Sheeran’s confession ostensibly make for great cinema, but cannot hold a candle to the Godfather or Goodfellas or Casino. The Irishman simply lacks the same likeability, memorability, and shock value necessary to catapult it onto our Mount Rushmore of move icons/favorites. The storyline moves proddingly, the makeup jobs are more distracting inasmuch as they showcase expertise, and the payoff is less than one would ultimately desire given the investment of time and energy necessary to engage one’s emotions in this overly-drawn-out film.

The sad part is this is likely the last time we will ever see the pairing of Pesci and De Niro or De Niro and Pacino, or any combination of the three. Back into retirement goes the “little guy” and into the twilight of their careers go De Niro and Pacino. There will be no Oscar for their performances here, though an obligatory nomination may be in order. The Irishman will more be remembered for its technical expertise and perhaps win Oscars for off-center categories, which though prestigious in its own right, is not what the expert cast ultimately prefers. Ghosts today, apparitions tomorrow. School the youngsters, but bore the choir I suppose. Netflix The Irishman Movie Review in summation? It’s nice to see the greats, even if their efforts yield little ripeness.

Jonathan Jacobs is a divorce and family law attorney in Orlando Florida.